A lush, dark YA fantasy debut that weaves together tattoo magic, faith, and eccentric theater in a world where lies are currency and ink is a weapon, perfect for fans of Leigh Bardugo and Kendare Blake.

Celia Sand and her best friend, Anya Burtoni, are inklings for the esteemed religion of Profeta. Using magic, they tattoo followers with beautiful images that represent the Divine’s will and guide the actions of the recipients. It’s considered a noble calling, but ten years into their servitude Celia and Anya know the truth: Profeta is built on lies, the tattooed orders strip away freedom, and the revered temple is actually a brutal, torturous prison.

Their opportunity to escape arrives with the Rabble Mob, a traveling theater troupe. Using their inkling abilities for performance instead of propaganda, Celia and Anya are content for the first time . . . until they realize who followed them. The Divine they never believed in is very real, very angry, and determined to use Celia, Anya, and the Rabble Mob’s now-infamous stage to spread her deceitful influence even further.

To protect their new family from the wrath of a malicious deity and the zealots who work in her name, Celia and Anya must unmask the biggest lie of all—Profeta itself.

I could not wait to pick up this new YA debut. Dark fantasy? Check. Original magic system? Double check. Character driven? Check again. Blending magic and religion and tattoos into one magical concept? Well..yeah, that too. I knew when I read the synopsis of Ink in the Blood by Kim Smejkal that I wanted to be one of the readers on her book tour.

Even better than all of that? I really liked this book.

Ink in the Blood is not your usual YA fantasy story. Not only is the prose dark and beautiful in a way that’s almost poetic, but the concepts are deep and vast and truly ask the reader to think about these things for themselves. I love dark fantasy, and when darker topics are threaded into a magical world, and this book showed off that strength in spades. Smejkal does an incredible job of still keeping the book light and quick, while also exploring some of the dark corners of our minds and our capabilities as human beings.

One of my favorite things about this book has to be the magic system. I was fascinated by this link between tattoos and religion and magic from the beginning, but Smejkal does not her readers down when it came to the meat of that concert. The magic system in this book is creative, original, fresh, and you can tell that the author thought a lot about how it worked and how she wanted it these powers to further the story. I thought it was masterful.

Another of the joys inside Ink in the Blood is the relationship between Celia and Anya. I love seeing more and more LGBTQ+ representation in YA, and especially in fantasy. I love reading stories that are queer stories, but that aren’t about the characters queerness, and this was a great one. Their relationship, and deep friendship, is fierce and relatable, not to mention a great example for all of the strong, young women today.

I’m not personally a huge fan of the circus/performer setting that’s big right now and also is used in this novel, but I will say this: it didn’t stop me from enjoying this book to its fullest. While it does take some time to ramp up into an un-put-down-able story, it does eventually get there and then you’re stuck. By the end of the story, I wanted more.

Ink in the Blood was dark, fresh, original, and full of magic and love and fierce women. If any of these things appeal to you, this book is right up your alley. And if they don’t, maybe try it out anyway. YA is continuing to go in more and more interesting directions and I look forward to seeing what else Smejkal writes for us in the future.

Kim Smejkal lives with her family on muse-satiating Vancouver Island, which means she’s often lost in the woods or wandering a beach. She writes dark fantasy for young adults and not-so-young adults, always with a touch of magic. Her debut novel, INK IN THE BLOOD, will release from HMH in early 2020, with a sequel to follow in 2021. She is represented by Daniel Lazar of Writers House.

Enter to win 1 of 2 copies of Ink in the Blood by Kim Smejkal.

Enter through this Rafflecopter form and may the odds be ever in your favor!

Published by A Morrow

Loves reading, writing, reviewing books. Hates writing "about me sections." View all posts by A Morrow

1 thought on “Ink in the Blood” 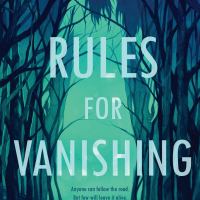